No matter how much we like to think the sexes are ‘equal’ in the music industry and no matter how accomplished women musicians are, when it comes to jamming they often seem to hang back and let the boys do the playing.

by Diana Wolfe and Fiona Wilde

An edited version of this essay was first published in Australian Musician magazine on 1 December 2007. 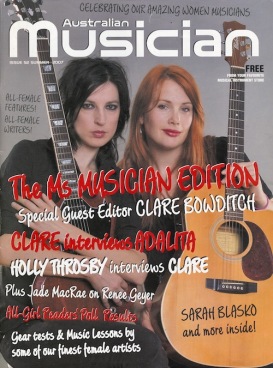 No matter how much we like to think the sexes are ‘equal’ in the music industry and no matter how accomplished women musicians are, when it comes to jamming they often seem to hang back and let the boys do the playing.
Like a lot of ideas, ‘Play Like A Girl’ started with a ‘whinge’! I was complaining to my musician girlfriends about how few women perform at jams around town and how few opportunities there seem to be for women in music once they’re ‘past their use-by date’, and one of them said, “Why don’t you do something about it then?”
Oh, me and my big mouth. But sometimes it takes a kick up the backside to get things rolling… so I hooked up with a long-time friend, rock guitarist Fiona Wilde, and we started approaching women artists, venues, promoters, agents, music stores, merch companies, graphic designers…
And on International Women’s Day 2007 we launched Play Like A Girl. The sold-out crowd at the Northcote Social Club were treated to amazing performances by some of Melbourne’s hottest emerging women artists — Liz Stringer, Dallas Frasca, and Milk — as well as ARIA winners Lisa Miller and Monique Brumby, and Ella Hooper. Lindy Morrison, former drummer for the Go Betweens and a staunch advocate for women in music, compered the night.
Now we run monthly Play Like A Girl jam sessions at 303 in Northcote (the last Tuesday night of each month) and attract up to 50 women each night. It’s a great vibe, and any worries we had about getting enough women up to jam were dispelled on the first night when we ran an hour and a half over time!
Our host artists represent a range of genres and styles, and have included Kerri Simpson, Cyndi Boste, Nat Allison, Tracey Miller, and Emily Hayes and Helen Begley from ‘Milk’, all of whom have inspired us with their approach to playing, performing, singing and songwriting.
As for the ‘jammers’, we’ve had sax players, guitarists, keyboard players, drummers, singers, bassists, violinists and even a girl on a resonator ukulele! We’ve had women from all over Victoria, and we’re always welcoming new faces.
Our aim is for Play Like A Girl to:
1) Provide an opportunity for women musicians to network, gain inspiration and support from each other;
2) Encourage women of all ages to develop and maintain viable and rewarding careers in music; and
3) Create a ‘safe space’ for women musicians of all genres to jam together and expand their creativity, skills and networks.
Billy Hydes Music has come on board as a sponsor, generously providing backline gear and promotion for the jams. DesignGrant designed our funky logo, which adorns our posters, postcards, T-shirts and badges.
Play Like A Girl seems to have come at the right time. We’ve been overwhelmed by the positive response, and we’re excited about helping to create a strong, nurturing, supportive environment for women in music.
We’re currently organising our next International Women’s Day concert, and hope to take Play Like A Girl out to regional areas, to schools and around the country in future. We’re also exploring possibilities for mentoring programs, compilation CDs etc, to help women further their careers in music.
If you’re a female musician of any age or stage, we’d love to hear from you — drop in to a jam session or send us an email.
Happy playing!

Diana is a qualified journalist and experienced media campaigner. She specialises in translating complex issues and ideas into campaigns that produce outstanding media coverage and tangible results. Her expertise and strengths are in the fields of social welfare advocacy, public health, community arts, and the applied sciences. She also writes essays and blogs on a range of social issues including greater recognition for Australian women in music.